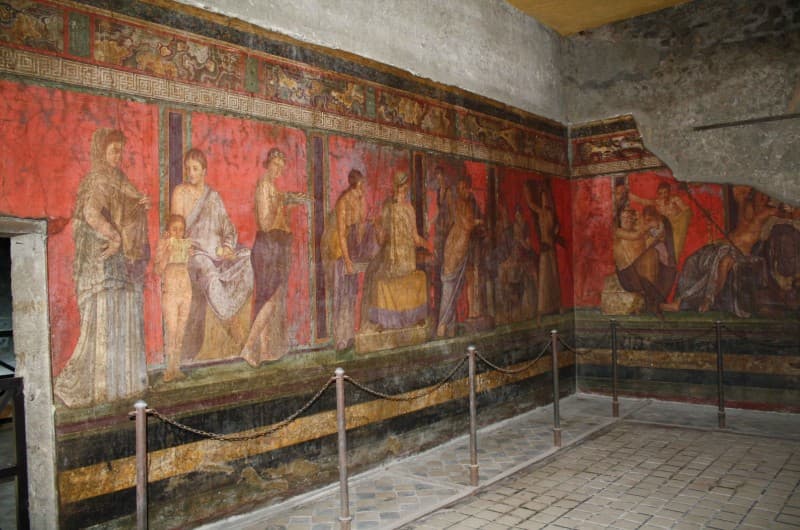 Start This journey back in time on a tour of Pompeii and its Villa dei Misteri. A deluxe tour bus takes you from your hotel or designated meeting point along the famous Amalfi Drive, passing picturesque little towns on your way to Pompeii. Here, your guide takes you through some of the ancient streets that archaeologists have uncovered over centuries of excavation.

Pompeii has been a tourist destination for over 250 years. Today it has UNESCO World Heritage Site status and is one of the most popular tourist attractions in Italy, with approximately 2.5 million visitors every year.Excavations have recommenced in some unexplored areas of the city, with findings reported in April and May 2018.

While you have a chance to marvel at the fabulously preserved frescos that adorn the villas' walls and floors with an Expert Guide, learn about the archeological efforts that began back in the 18th century and continue to this day. The Villa of the Mysteries (Italian: Villa dei Misteri) is a well-preserved suburban ancient Roman villa on the outskirts of Pompeii, southern Italy, famous for the series of exquisite frescos in one room, which are usually thought to show the initiation of a young woman into a Greco-Roman mystery cult. These are now among the best known of the relatively rare survivals of Ancient Roman painting. Like the rest of the Roman city of Pompeii, the villa was buried in the eruption of Mount Vesuvius in 79 and excavated from 1909 onwards (long after much of the main city). It is now a popular part of tourist visits to Pompeii, and forms part of the UNESCO World Heritage Site at Pompeii.Excavations in 2018 have revealed important remains of horses in a stable near the villa. Get a sense of the history and grandeur preserved in the city before you head back to Sorrento and the present day.

After the visit free time for lunch (optional). On the journey back, visit to one of the most prestigious cameo and coral factories, to see the typical production of cameos.